Well, it has been a while since I put pen to paper or should I said keyboard to WordPress.

It is a glorious day. Spring is definitely here. Judging by the smell of orange, grapefruit, lemons and lime blossoms. The bees are buzzing around selecting the nectar. The wisteria is in bloom. We do have a white one at the moment and the scent is just so subtle and sweet. The daitura are also propagating their scent at night and the evenings are just divine with their sweet and overpowering smell. Just a delight! And the native iris are also showing their best. As dusk slowly arrives the frogs in the background are already calling their mates. The owls are fluttering as soon as I walk out and I can hear their heavy flights above the bottle brush when I take the dogs for a late night wee before retiring for the night. The green frogs are croaking in the background. The cows are still begging and bellowing for extra hay every night. They must be the best fed cows around.

We have not heard nor seen the butcher birds over the last couple of weeks. I guess they are busy mating. The magpies tho, have come for a nightly feed, still awkward at catching the little meat that I can throw at them. Frip, the cat does not help there I am sure as he stalks them ready to pounce and catch…if he can.

It has been a very busy few months since we got back from Europe. Very busy indeed. I have redone the whole veggie garden. A complete overhaul. I have weeded 8 beds and recovered them with wood chips. A new technique inspired by the video called:” Return to Eden”. Not that I am very keen on religious propaganda. But that does not distract from the fact that the principles explained have got some merits. I was a little suspicious at the start to hear all this bible recitation at every step of the video. It got quite tedious. In the end I decided to give it a go in spite of the spiel.

So quite painstakingly, I weeded all the beds . Yes, the 8 of them meticulously.
As for wood chips it was not too hard. When we were away, the local charming and efficient Bill came and lopped a few trees that were quite dangerous to have around. He made a huge pile of wood chips which I wheeled into the garden day after day. The results were quite amazing. After just a couple of weeks I could see how the soil was still very moist and the newly thinned and planted vegetables were growing very well. I was impressed.

They did mention in the video that there was no need to add any fertiliser of any sorts or even watering should be kept at a minimum if at all. But I decided to complete the experiment keeping only 2 beds mulched with the chicken manure and hay that I collected from their coop.

I also planted the same vegetables on the chips bed and the manured/hay bed just to confirm it for myself and to see if there was a grain of truth in all that.

It has been a 3 months now and I really can see the difference between them. We had a few days of over 31 dry and windy.
The one with the chips are springing and shooting ahead at quite a speed. The weeds are down and if they spring up a gentle tug will do the job. The soil underneath is really moist. As for the other beds with the straw, they are quite dry and weeds crawl onto the surface at a faster pace, making harder to pull the whole root. The soil has also hardened quite a bit and I have been watering them more often. 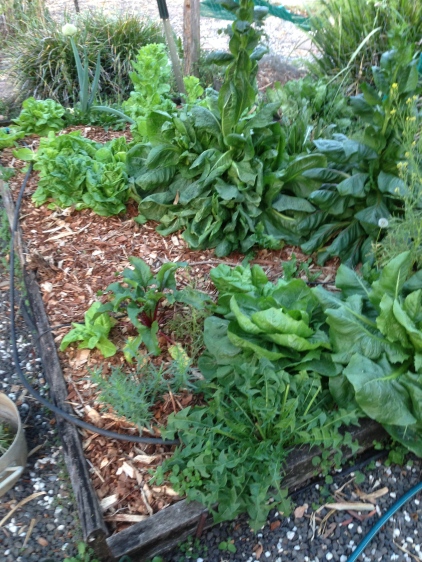 We also has some fabulous crops of broad beans and peaches. The peach trees have been thinned last summer and this year we had huge peaches, but they were not as sweet a little floury. Nevertheless quite good and are still producing. Maybe the later on they might get a little sweeter. Mulberries have also been abundant and every morning we go to the trees and harvest a little basket. I am freezing some for later on also.

Well, that was the garden bit. In the meantime with the few days of rain that we had, I managed to finish Peter’s pullover. I had knitted one last year with hemp and wool and it became an Indian dress. So I redid the whole lot. It fits him to perfection now. He is very happy with it and so am I. As I was knitting, I also listened to some audio books. Nothing fancy. Just a thriller by Harlan Coben. That really got me in and help me finishing the knitting quite nicely.

Another event that took place was the arrival of a new dog. Yes, after we lost our last German Shepherd 2 years ago, we were playing with the idea to get another one for quite a while and having difficulties in making up our mind. So one day I looked up to see if there was a local breeder. We don’t like driving too much. I was not hoping to get one around here. Finally, we did and the little Zaina is among us. Peter and I were quite impressed by the way the kennel was ran. We saw the mum, aunties and uncles. After 3 hours of talks and info (which drove me crazy)  we drove away with her…not the owner but the dog. Deb was a real German Shepherd lover and has been doing it as a hobby for 30 years apart from her teaching biochemistry at the local school We did have something in common as both of us are also ex teachers. So the yakking went on for quite a while and I was glad to drive back home finally!

The old Labrador, Elsi, is not sure of the new arrival and Frip, the cat, did not take it too nicely either. (to be expected) But after a week of cohabitation the two of them have become the best of mates. Running around the house and the garden playing chasy. Of course you may have guessed, The dog is really at a disadvantaged here as she is the newly arrived on the block. But that does not stop her from trying to get the upper hand with her size and being boisterous. Frip so far is winner. And Zaina is nicely fitting in in our routines.

After all this, we also managed to catch up with friends and have a lovely lunch and working at the gallery over the week ends and doing a new hanging there. As I said a very busy few months.

2 thoughts on “Busy in spring”