Well, here we are again in summer almost tho. The nights are still chilly and the temperature has not yet gone through the roof. It may come….it is not too far away.

After the storm of hail that we had a couple of weeks ago, I thought we might be at the beginning  of the ice age. Violent winds swept through the bamboos and the trees, rain came pelting down with thunder and lightening. But the worst of all was the hail. Big ones. They were almost as big as tennis ball… The whole garden was covered in a blanket of white thick ice. We thought we could have been in the Alps somewhere. Down it came with an almighty force. It pelted down. The noise was deafening. We could not see a few metres in front of us. Having a tin roof….and no cat on it I can assure you, the force was deafening, not even a bird could be seen or heard. The dog screamed to be let in and the chickens took refuge inside their coop. Not a sound could be heard except the roar of the hail. The temperature also fell dramatically and some jumpers  resurfaced for the next few hours. 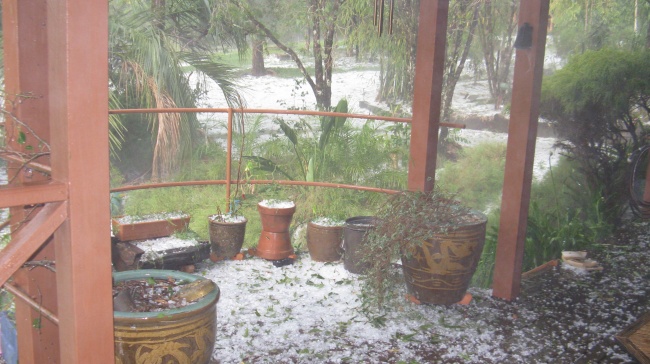 In a very short time, the whole garden and property were under ice. We dared walk out after the 20 mns ordeal. It was slippery and the ice from the hail was at least 4 to 5cm thick. We were scared walking around. We had never see anything like this before. The ice under our feet was slippery and treacherous. As we made our way towards the vegetable garden, we were just staggered at the devastation around us. The corn which was ready to pick had been shredded to a pulp. The other veggies were gone and looked as if they had been descended upon by a swarm of locust. Nothing left. The little gherkins which staring to poke through with little yellow flowers broken, hammered, hacked and looked pitiful. And as we made our way around the same spectacle presented itself…devastation everywhere. Then, we noticed a carpet of green on the ground about 2 cm thick, we lifted our head and most trees were also totally defoliated. The force of nature and its brutality suddenly hit us. We were awestruck in front of such calamity. How we could feel for the victims of tornadoes, hurricanes and flooding!  The victims of bush fires and tsunami! We still had our life intact, the damage was only the plants. We were lucky really that nothing worse had happened.

The ice persisted on the ground for 48 hours in big piles around the house. I could go on enumerating the extend of the damage, but there is no point in all that.

Over the next few day, I noticed that some of the zucchini were starting to grow a few leaves, a few vegetables managed to struggle and put new shoots. But the damage had been too great for them to produce anything. So, patiently, I started to prepare a few trays of seedlings and bought a few others. Hopefully, we might gather a few vegetables a little late.

The drought is almost gone. The rain should be replenishing the water tanks for another year so that we would not have to recycle the water too much. The grass has managed to push through a few centimetres and the cows seem to appreciate the fresh shoots poking through. They still bellow at 4 o’clock for extra feed. They are never satisfied…

Today, while in the gallery doing some voluntary work I managed to sit on the bench soaking the warmth of the sun for a few minutes, we can start to feel the first days of summer approaching with lots of rain coming up our way hopefully.

Big spring cleaning is also under at the house. Carpets, jumpers, curtains are all getting a good shake and a wash. Winter clothes are being packed away till next year and summer clothing is already filling the cupboards. Mind you, I’ll have to throw a fair bit away also. Every year, I go through a good clean up of what has not been worn for a while and give it to charity. There are always the ones that I have been reluctant to dispose of. Sentimental value I suppose. But it seems that I go through the same thing every year. This time it is for real… so I say anyway.But the whole lot goes. I spoke to one of the artists at the gallery and she will be taking the odd pieces of silks and cotton that are no longer in use. I am sure Pauline will find a good idea to utilise them.

Well, back to my cleaning and till next time.

One thought on “Hail or Hell”