In anticipation for our long trip again, we are preparing like crazy. We found a good house sitter for the time we will be away,  to look after all our animals. This is the hardest part. So many things to think about and to put in place. It is so exciting and at the same time a flory of preparations.

The cows and their calves have found a new home with our next door neighbour who will take them with his herd. That is so nice of him to do so.  He will also put our cows in calf so that when we get back they will be ready to deliver the next set of babies.

Our dog has familiarised herself with her new keeper last week as she came to have lunch with us and get acquainted with everyone. The chickens are going to miss out on all the goodies that they are being served everyday. Bits of meat and left overs. Our house sitter is vegetarian, so not being bits left for them. But I am sure they will be well. I stocked up on grains for them and bought packs of dog food for our scavenging insatiable labrador. She will also be missing out on treats from time to time.

The vegie garden will have also to be looked after. But being winter here, not a great deal needs to be done. I have already planted some peas and lettuces, beans, broccoli. But Magalie will enjoy all these treats as well as all the citrus that are producing abundantly this year. 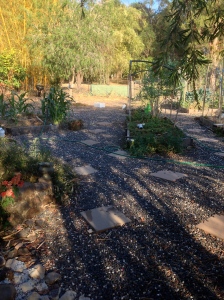 The car papers have been put in place and all insurances paid. All would have been out of registration by then. Money has been transfered to Europe and suitcases are almost done.

Then, there are all the instructions of what to do in the house. A big list is being compiled with further do’s and don’t.

Gosh! I hope I have not forgotten anything. Presents for the family are packed. Everyone had a special request. Sulma wanted some house items and tea tree oil and not to forget Vita Weats, his special crackers. In Bangkok, tho everything can be obtained some are obviously not there. Always a pleasure to do so. Jaime, will get some local coffee and maybe home made marmalade. Oh! and all the grog duty free for the others. Gee! what else?

Then, a very good friend will be taking us to the airport and some other friends will be picking us up. The airport is so far away and there is no public transport to Brisbane. It is so lucky  that we live in such fabulous community.

Our trip will take us to Bangkok, London, France and back the same way we came from. It is also very convenient that our boys are well placed. One in Thailand and the other in London, while the rest of our friends and relatives will be in South of France.

The excitement is palpable. Everyday we wonder what is that we have forgotten to pack, to write down or to mention. But even if we did, it will be too late. In the anticipation of going we have forgotten twice to roll the rubbish bins onto the road and we had to take it to the tip…a real chore. This morning early, around 5am, I hear the recycling truck roaring down the road…warm in bed I did not feel like getting up. But just a little later  around 7AM, another one passed and Peter jumped out of bed, got dressed in a hurry and ran down the drive at full speed dragging the bin. OOPS! too late, we missed it says he as he got back up puffing. I know I said. You did not run fast enough, outraged…what? I did, but too late. The neighbour told him that second truck was the rubbish truck, the recycling went by at 5AM. Haha! that was the one I did not feel like getting up for and tried to chase it down the drive….gosh 100m in the freezing cold, no way. So I chuckled. Not for me. As I had to take the car for a check up, I took a plastic bag and filled it with some recycling stuff and dumped it in the village….not on the road you may have thought…but in the bins for recycling. So at least some of it got disposed of.

That is what happens when your brain does not work in the usual way. Distraction from the routines and too much feverishness about the trip make you forget the most mundane chores. Anyway, not a big deal after all.

I just hope that everything is in place and even then if they are not, we’ll have to take as it is. Just hope that the dog won’t get too fat, the fish won’t be forgotten and the chickens will go on laying even without all the goodies that Peter provides them every day. The cows will be happy on Ron’s paddock with his herd.

Maybe if I feel so inclined I might write a little when we are away.