Just a couple of days ago, a friend of the lady who rent our cabine up the hill arrived. EM, our tenant, asked us if it was ok by us to have a friend staying for a few days. She had a dog with her but this dog was pretty well behaved . Of course we said, it should not be any problems. Em’s dog is sweet and a real little gem and she gets on so well with our black pudding of a labrador.

After, having taken J to the airport for his flight back to Melbourne, we arrived  back at home. Our cows were bellowing their head off for their 4 o’clock feed. I jumped out of the car, got the wheelbarrow and walked to the hay stack where I fetched 3 arms full of top lucerne hay. On my way to the paddock, I see this brown dog running full speed towards the fence. It got zapped by the electric wire separating the paddocks. That did not stop it. He went back a second time and charged the cows down the hill. The four cows including the 2 calves were galloping at full speed roaring with fright, they did not know where to run, they huddled against a clump of bamboo together. It did not stop, it went at them biting at the heels of the 2 little calves. They were wailing with terror not knowing what was suddenly happening to them at feed time. They kept stampeding  in all directions the dog being more agile and more nimble catching up with them. Their cries could be heard for miles away. I was totally taken aback.

The owner, kept on calling the dog but it would not come, desperate Em, ran down the drive to fetch the dog calling all the time to no avail. Finally, after what seemed an eternity out of sheer despair and fear, I screamed to the owner to do something. She was totally inept. The dog arrived back up the drive not wanting to obey and sheepishly made an attempt to go to its owner who did not do a thing.

She told us that she had never seen it behave in that way. He loved cows and in fact was scared of them. She had photos to prove it. I was totally dismayed by her reply. NOW,  you are seeing what your dog is capable of doing on a farm and from now on your dog must be kept on a lead at all times. No, she said, I could not do that. Really, you come as a guest here, and you lay down the rules, that is really incredible I thought. This is not how it works here. I reiterated my point, but she carried on telling me that her dog NEVER behaved that way. I don’t care what happened before, what matters is what is happening now here, let it be a lesson to you and your visit on a farm. She still would not take my point and insisted that her dog would not go on a leash and so on. 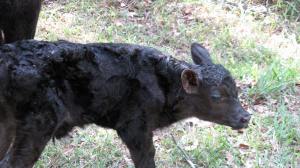 The next day, after having her dog finally tied all night she asked Em, if the dog could be left off the lead, absolutely no said Em, I do not want to risk another episode like yesterday. The woman was not going to take it that way. Em, told her to go as she was not going to take responsibility for her unruly mutt. She asked her to leave and she moved on.

My husband rang me at the Gallery and told me the ending of the dog and the lady. I breathed a sigh of relief, I was fearing that she had seriously intended to let her dog off the lead and both of us were going to kick her out in a very unpleasant way. My husband did not rest all night at the thought that she might not have heeded our request. But all is well and end well.

The cows are just getting back to normal still a little weary as they are checking around around to see if the horrible mutt was still around and today at 4o’clock they came by the fence and started their usual demands…maybe insisting for a little extra for the troubles they went through the other day. I was not going to give in this time…maybe tomorrow.

This is just a quick insight into a little event that happens regularly among people.

Not so long ago, I attended a family wedding. There were many people that I had not seen for many years, in fact some 30 years or more. In passing it is quite something that you meet old acquaintances only at weddings or funerals. Normal, you might say and it happens all the time.

When you arrive and see all these faces and everyone is impeccably dressed for the circumstances, you wonder where you stand and who are all these people. Most of us  in our late  60’s and 70’s.  Even family members seem so distant and you try to put a name or  recollect who they are now. Or rather who they were then.  I  stand for a while a little lost trying to figure out this face or that. But  nothing comes to mind and names are so far away in your memory that all the searching does not bring anything back. Dozens of people are in the same predicament as I am, that is sure. Finding a name or a face or some vague memory of where did I see them last. What do they look like now? Yes, what are they now that is what matters after all.

After re acquainting yourself  with faces of so long ago I hear this sentence frequently: ” Gee you have not changed at all”. Really,  I asked myself, if that were the case why is that I do not recall any of you…but that was an internal remark. Do I play the game and say ;” wow! neither did you” You look exactly the same, you have not changed at all. That would be really telling a fib I say to myself. So I reply;” I don’t think so, surely I am not the same as I was 30 odd years ago…I have more wrinkles, my hair is whiter, I wear glasses I exclaim laughing.”  The other replies:’ yes, it has been quite a while and what have you been up to”. Internally, I muse and say to myself, where do I start? So, I say:” it depends where you want me to start from”? Cheeky, unnerving, puzzling, disrupting the nice flow of the meeting. So what, I don’t really care in the end. Totally unsociable.

To this, the other person is a little at a loss. A few seconds of silence ensues. Both feeling the awkwardness of the situation. Why is this? Simple when you think of it. Had I answer to the other person who was fat, slumped and white haired: “Gee, you too, you look amazingly the same” which of course that what they wanted to hear also. We would have been both comforted in the notion that we had not aged, we were  both the same spring chickens we were 30 or 40 years ago. We would have both felt elated at this and reassured. So, the original statement that I had  not changed was futile and a conformity that we apply in social settings. In my views this is really dishonest because we are not facing to the fact that we are getting old and all the psychological and physical  problems that old age may bring. Especially at a wedding, where the couple are in their late 20’s or early 30’s. We feel left out, the good old times are gone and so is our youth and glamour and at times our social status with it.

Why do we have to ignore the fact that we are ageing? . These polite exchanges are trying to ignore the facts of life. Well, I feel quite confortable where I am and do not wish to play this silly game. It breeds a false sense of security. After all we are mortal, our life has a definite curb, so I’d rather be well in my skin NOW and stop pretending that I am the same as in my 30’s. How hard is it to accept this? It could be, if you are regretting what you were. Why regret? Is there something that we are not accepting now?. That something that we refuse to look at is our mortality. A famous Indian philosopher Krisnamurti, said: “Die now, then you would be able to see and may comprehend what is immortality.”

Maybe the subject for another little writing.