Peter and have finally started to clear up the debris of the massive trunks and bamboos . As I said previously, the chainsaw managed to die the day we wanted it, so armed with a small hand saw we cleared the chicken coop roof. Two huge branches fell on the roof and they were Casurina pine trees. For some reason they are very hard and tough to cut. The wood is really compact. Legend around here has it that it was used by bakers in the olden days. Their hardness made them apparently suitable for burning long and steady. I can attest to the hardness that is for sure. It is one of the toughest wood I ever cut. That was a work out and half at the end of one hour we were just exhausted. No gym today!

The chickens were of course very curious and all gathered around us to see what they forage  from the fall out. They were happily pecking around as hard as they could and occasionally running away when a branch was cut. But back they were in a flash to get more juicy bits. 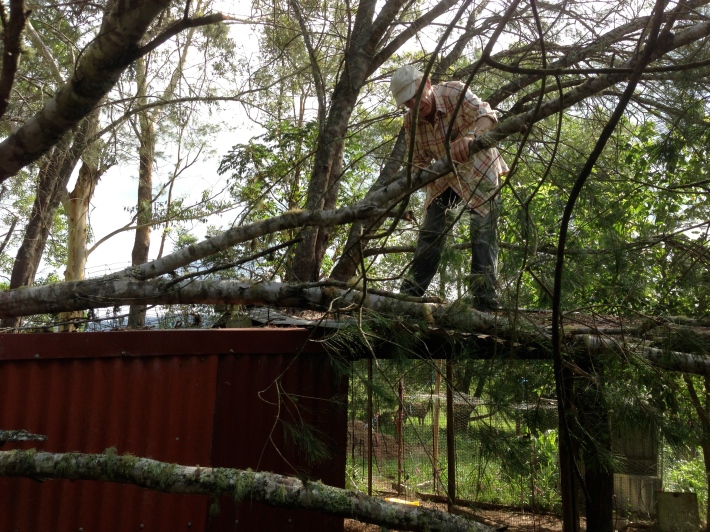 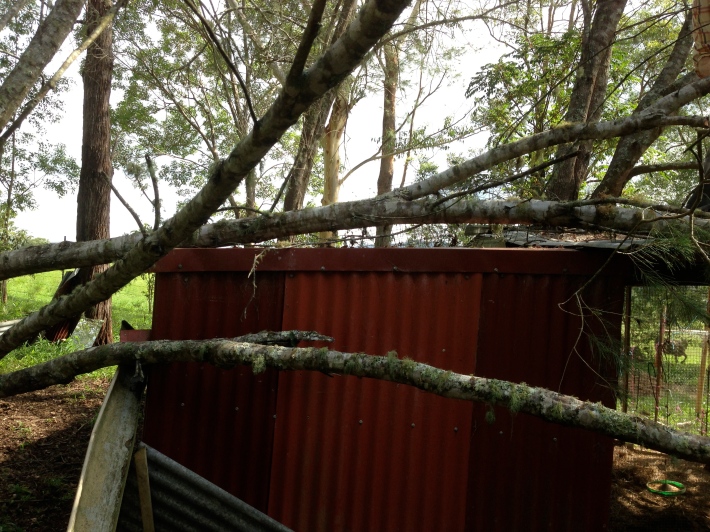 After these efforts, we decided that we were going to wait for the chain saw for the other trees that had fallen. Among them, another big Casurina behind the house. Too hard work. We were in such a sweat after we completed this huge job. When we got back from the farmer’s market the next day, we decided to clear the huge bamboo that had crashed on the gate. That was a little easier. We just moved the huge poles away from the gate and onto the inside paddock. The water had drained from them a little and they were not that heavy to carry. I put a notice on our Nimbin Forum to see if they were some people that might be interested to pick up some poles. So, after all we may not have to do such a huge clean up if some nice souls decide to take most of them. That would be nice no?

The grass is now galloping and it is time to mow. Over the next few days that will be my job while Peter will attend to the huge operation of dismantling the outside of bathroom wall. Yes, we have no bathroom. No shower. But in the heat of summer, we have a nice warm outside shower. That will do the job for the time being. But I dread to think what he will find behind these walls. The whole plumbing section is just behind there. IS the plumbing really gone or was it the tiler that did not do his job properly? So, painstakingly he will attend to all that in due course. It never stops really. He has such patience it is unbelievable.

On my way to the Farmer’s market this morning I saw the extend of the damages that were inflicted on the roads. Huge branches and tree trunks lay scattered on the side of the road. Bits of road with big pot holes, the wind and water had inflicted serious erosion of some parts of the main route and care was taken to avoid any major accidents. People were driving cautiously. I guess everyone has some sorts of ideas of what a disaster scene looks like by now. It is so frequent all over the world, we could become almost blaze by it all. it is easy to detach one self from disasters around the globe, but when it hits home it is another story I thought. Until one is really affected by it,  then one realises that the world over is in the same predicament. Human suffering is the dreadful feeling that we all share.